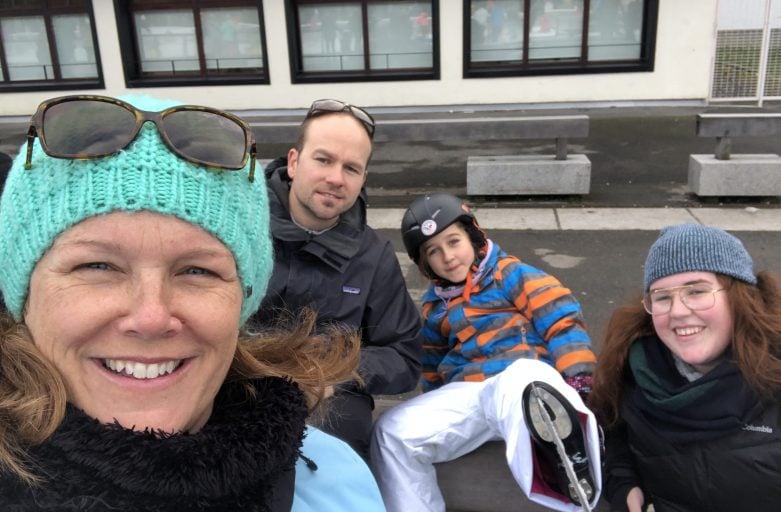 It was like Christmas when Jaedyn came to visit. It actually was Christmas eve when she arrived. Vivi and I were so looking forward to her coming. She has this joyous disposition to her and she’s my little girl and Vivi’s big sister.

We hadn’t seen her since we said good bye to her in New York about 5.5 months before. Of course she was tired from such a long flight(s) and it took a good couple of days for her to get over her jet lag.

Christmas is magical in Switzerland. We had a wonderful Christmas celebrating with her, Vivi, Luc, Guy, Camille, Elise, Moreno and his mother Gabriella. They lit up the Christmas tree with real candles and we played a lot of games and ate a lot of food. Gabriella and Moreno are Italian so we had some exquisite Lasagna and (desert???).

The next morning we loaded up and drove to Morzine, France to an Airbnb chalet that we had rented for 6 days all together. But before we got there, we stopped in Evian to visit quickly, buy some mussels???, and fill our water bottles up with free pure Evian water – the stuff you buy at the grocery store. It just easier comes out of the wall in Evian.

Sadly, there wasn’t any snow in the ski village of Morzine and the mountain snow was kinda shit (from what I understand). Some people went skiing and boarding while the rest of us explored the town. Vivi and Jaedyn also went skating at the outdoor skating rink, and we drank some more hot mulled wine.

Every night was a feast. We all took turns cooking and we didn’t scrimp at all on the meals.

One day some of us walked around the ski mountain on the trails and we all met up for lunch. Another day Gabriella, Luc, Vivi, Jaedyn and myself walked around a frozen lake that reminded me of Durrance Lake in the winter time.

On New Years Eve day, Jaedyn, myself and Vivi decided we wanted to stay home and it’s a good thing we did. Violette started puking at about 9am and didn’t stop until that evening. She spent New Years on the couch – poor thing. We rung in the New Year all together.

We left the next day and our family headed to Lauren and Francois’ house to spend some time just the 4 of us together before we separated again. It was wonderful. Lauren and family were up the mountain and said we could crash at their place to have some alone time.

While we were there, we went to Lausanne one more time. I also caught what Vivi had but was sick for much longer. And of course, Jaedyn wanted to go to Vevey and Pizza Taxi for a walk down memory lane (as I did) so the three girls did that while Luc went and played up the mountain with his friends. It was fun remembering what things were like 8 years before. Of course Vivi didn’t remember but Jaedyn remembered it fondly so it was nice to share these moments with her.

We also celebrated Vivi’s actual birthday with some family members over lunch. Again it was so awesome that Jaedyn could be there for that special day as she is used to spending her birthday with friends and family from Canada.

I loved that she came. It was the best gift I could have received. She provided so much emotional support for me and much needed empathy. For Vivi, she was so thrilled to get to spend time with Jaedyn and have fun with her. Vivi is happiest when all the family is together, so I think this really helped her to not miss Canada quite as much.

We booked a flight for Jaedyn to leave the day before we left so we could see her off to the airport. It was hard, as anticipated, to say goodbye again to Jaedyn knowing we wouldn’t see her for another 6 months. I miss her terribly (I’m writing this 3 months after we said goodbye to her).

The day before dropping her off, we spent hours and hours organizing what we were bringing travelling. We also left some stuff behind in Switzerland and we sent a piece of luggage with Jaedyn. We had too much stuff so we also have to ship a box back to Canada as well which we dropped off in France (because it’s cheaper) after dropping Jaedyn off at the airport. This was much more complicated than you would imagine. In the end we also had a donation bag as well. But we got it all organized and packed. I brought entirely too much stuff with me for the second half of the trip but figured it was mostly stuff I could leave behind and part with if need be. Turns out I actually sent a box home from Thailand and another box with some of our souvenirs from Vietnam.

This concludes this portion of the European trip. We move to South East Asia in my next blog post. Check this map to see where we’ve been and where we’re going.

Thanks Robin.. What a wonderful family time before your long journey.. Super that Jaedyn was able to join you for Christmas and make it more memorable for you all. Time is going so quickly and soon you will have completed your journey.. Hope all is going Smoothly and weather is holding out with sunny days. Spring is here now and we all are loving it. Took a long time to get here this year. Stay safe and drive carefully over there.. Donna

I’m sure missing Spring on the west coast! Yes I’m sure glad she came to visit us. I miss her so much.